Before I get into the conclusion of my Poly origin story I wanted to state that this week has been extremely chaotic. The threat of Hurricane Lane sent most of the people living here on Oahu into a state of panic since a hurricane hadn’t touched this particular island in years. People had visions of rolling blackouts, flooding, and evacuations in their minds as they descended on every store that possibly could sell food and bottled water. We did lose power for a short while but nothing worth calling my insurance provider over. 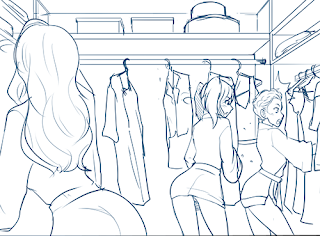 Chaos continues with Mace so this week's update will be a sketch page. Click the image above to go to the comic.

Picking up where I left off last week, Shep and I had been married for about seven years when the conversation about experimenting came up. We had talked fairly broadly about my bisexuality and vaguely about the notion pulling another girl into a tryst with us but I wasn't comfortable with sharing my husband.

To clear up any misconception about the nature of our marriage before it gets asked- Shep and I were (and are) happily married. No crazy fights, no ultimatums, just clear communication. We had no secrets and a healthy and active sex life. We share the same hobbies so there was really no real moment of boredom.

I was at my high school reunion and spending time with my old friends, Tammy and Dawn included. Shep was out of town for a business trip. I was having fun and reconnecting with one of my guy friends that I had a crush on. Kevin had vanished after high school to the Army and did a couple of tours in Iraq. After some drinks, he admitted to having a crush on me too. It was crazy and typical, I had spent 2 years of high school single and crushing on this guy! Years later and happily married, he confesses interest. Talk about a little too late.

I laughed about poor timing and texted Shep. Then.. like it was nothing, he told me to go ahead and sleep with Kevin. I was a little tipsy and floored by this suggestion. I didn't understand where it had come from. So, I called Shep to get clarification.

Shep explained that he wanted to give me the opportunity to explore the possibility of being intimate with Kevin because I never had the chance in high school. I had to consider it. Was I ready to be casual about having sex with other people now that I was married? I thought of the idea of losing Shep to another woman, as I had lost others in the past and doubt twisted like a knife in my chest. But I trusted and loved Shep. Would I feel differently about Shep if I slept with another man? Sometimes, the best way to figure something out is to confront it, right?

I weighed these possibilities and insecurities in my mind. Together, we had the decision to try being open with the knowledge that we didn't love each other less. We just wanted to try something different. There was a lot to gain and, a lot to lose. I didn't know when the opportunity would come up again, it took a lot for me to trust someone. Shep had my permission to go hook up with someone on his business trip and I had his to sleep with Kevin or whomever else I wanted to at the reunion.

After my phone call, I pulled Kevin aside and propositioned him. I had my husband's permission and I wanted to explore the possibility with Kevin, if Kevin was game. He was surprised, a little apprehensive and skeptical until I showed him the text. No secrets, no lies, just honesty. Kevin didn't make any promises but we decided to allow the night to progress naturally with us flirting; the reunion had turned into our first date.

Kevin and I ended up in his hotel room. And from what I heard when Shep got home, he had some success as well. The conversation that we had following was interesting. Did we want this open thing to just be casual? Did we want to establish longer relationships? The answer at this point was that we just wanted the variety. We were just going to be open.

Over the time that followed, I realized that this wasn't realistic. For Shep, it's harder to find girls that just want to be casual and only have one night stands. He needed to establish relationships with people to do things with. But there was also the realization that you cannot control how you feel towards anyone. I knew it was possible to be in love with more than one person. The love for one would not diminish the love for another.


So we decided to open ourselves to the opportunity of love with other people. We became polyamorous. Then it was the question of how this was supposed to work. We didn't know anyone else that was poly or even swingers. We knew a bunch of bisexual women and homosexual men. It seemed like no one else wanted to deal with multiple legitimate relationships. We had to go to Google to get an idea of the terminology and literature on this whole poly thing.

I started reading "Ethical Slut" and came to the conclusion that much of what they proposed in the book were common sense things that Shep and I had already figured out. Being clear and honest about what it is you want and expect from your partner is the key to making any relationship work. We formed plans and strategies for how we would manage our others, whenever we found them. The biggest thing while we were still being casual was using Google Calendar to manage our dates with other people and then making deliberate time for each other.

There you have it. Shep and I being polyamorous was a logical and natural progression of our relationship. =)